Data Transfer Can Be Smarter 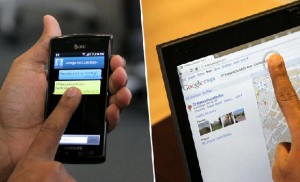 New technology developed at the MIT Media Lab offers a clever way to easily transfer information and files from one device to another. Nearly everyone uses some combination of computers, smartphones and now tablets, Web-enabled TVs and e-readers to conduct business, email, maintain a social networking presence, relax, and share information, Websites, jokes, photos and video links with colleagues, family and friends.

A new technology developed at the MIT Media Lab offers a clever way to easily share information on one device with another. This is a capability that is becoming increasingly useful and important in a multidevice world.

Why? If you’re like most, you probably have two computers (one for work, one for personal use) running in the same room, a smartphone, and one other device such as a second phone, tablet, e-reader or Web-enabled TV.

Each device has its own purpose, and as a result each has different information stored on it. For example, the work computer might have an extensive list of bookmarks for work and contact information about colleagues and business associates. The home computer typically has photos and contact information of friends and family. The Web TV might have some preselected applets that get you to your social networking and streaming video sites. The home and business smartphones likely have many duplicated numbers, but there are also some that are unique to each.

Whatever your collection of devices, it is likely that there are many times when information on one device is needed on another. You might have a photo taken on a smartphone that you want to view on your computer. There could be a YouTube video you’ve just discovered that the person sitting next to you simply must have for himself. A text message on your phone might include a street address that you need to look up online on your computer.

In most cases, the way to transfer the data (be it a file, URL, block of text, phone number, etc.) is to cut it, paste it into an email or text message, and then send it to yourself so you can retrieve it on the other device. If there is only a small amount of information, you might just write the URL, phone number or address on one device down on a piece of paper and enter it on the second device. Alternatively, you might attach a file to an email message or copy it to a USB drive to transfer it to another computer (if the other device accepts a USB drive).

To reduce the reliance on these methods and to greatly simplify such data transfers, Pranav Mistry of the Fluid Interfaces Group at the MIT Media Lab has developed SPARSH, a technology enabling you to share files and information via the cloud.

With SPARSH, it appears the conduit for data transfer is simply you. The way a data transfer works is that you, for example, touch a photo on your smartphone, walk over to your computer and touch its screen, and voila, the photo is now displayed on the computer. Similarly, you could highlight a street address in a text message on your phone, walk over to your computer, touch the search line in a browser, and the address appears and is instantly looked up.

Essentially, SPARSH offers cut and paste functionality between devices, with the body seeming to be serving as the conduit.

However, if you look under the hood, the way SPARSH works is that it copies the designated data to a temporary file in either a Dropbox or ftp account. When you touch the screen of the second device, the information is retrieved from that temporary file.

SPARSH currently runs as an application on smartphones, tablets and other computers. A user must have the software installed on each device and must be signed into his Dropbox or ftp account. According to New Scientist, Mistry hopes that SPARSH will eventually be built into the OS of various devices. The article noted that Mistry believes it is “currently possible to incorporate [SPARSH] into Google’s Android mobile operating system” and that his team has also implemented a browser-based version.”