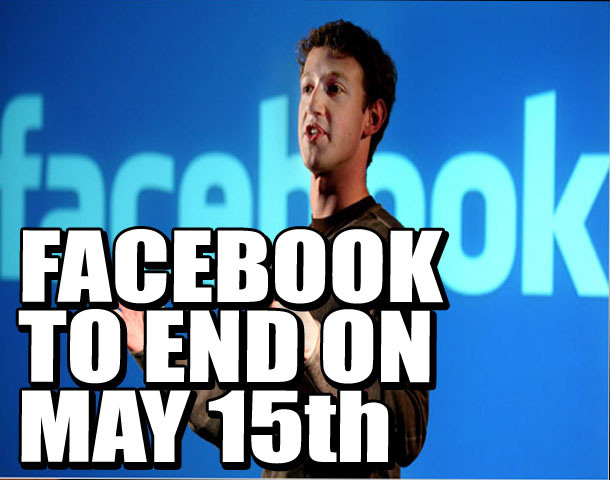 I know some of you know this statement or article already that Facebook will end or shutting down this May 15ht of this year which is next month or two weeks from now.  Below is the information or articles that spread around Facebook. Some people believe on this and some are asking how true and accurate this report or information was.

PALO ALTO, CA –Mark Zuckerberg announced that Facebook will be shut down in May of 2013. Managing the site has become too stressful.

“Facebook has gotten out of control,” reportedly said Zuckerberg in a press conference outside his Palo Alto office, “and the stress of managing this company has ruined my life. I need to put an end to all the madness.”

Zuckerberg reportedly went on to explain that starting May 15th, users will no longer be able to access their Facebook accounts. That gives users (and Facebook addicts) a year to adjust to live without Facebook.

“After May 15th, 2013 the whole website shuts down,” said Avrat Humarthi, Vice President of Technical Affairs at Facebook. “So if you ever want to see your pictures again, I recommend you take them off the internet. You won’t be able to get them back after Facebook goes out of business.”

Zuckerberg said the decision to shut down Facebook was difficult, but that he does not think people will be upset.

“I personally don’t think it’s a big deal,” he said in a private phone interview to a source close to a friend. “And to be honest, I think it’s for the better. Without Facebook, people will have to go outside and make real friends. That’s always a good thing.”

In my own opinion, I don’t believe and I don’t think Facebook will be shutting down or closing their services.

* First reason is they make so much money on advertising and they are one of the most popular social networking websites on the internet.

* Second I don’t believe that it ruins Zuckenberg life in fact this is the reason why he become the youngest millionaire in the world, it is because of Facebook.

* Third reason, Zuckenberg is not the only one who runs his office, he has plenty of staffs that works for him and help Facebook function or generate this company.

* Fourth is, we can still go outside and make real friends with or without Facebook,  it is an individual choice to become active or to do something or not.

This rumors or statement of shutting down is a hoax, they just want to make a story that would make people wonder or make upset.  Also, this may cause other Facebook user to transfer another social networking sites or this makes Facebook more popular, if they keep on talking about it. And in case if this statement is true that they will shutdown, oh well, we don’t have choice. We just need to find new ways to connect, socialize families, friends and people on the internet. What do you think?